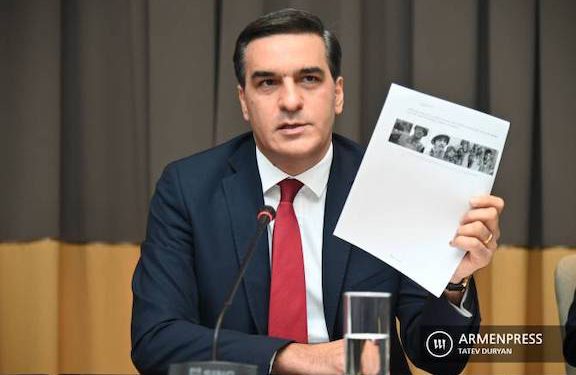 Editor’s Note: The following news report features graphic description of torture against Armenian POWs by Azerbaijani forces, which some readers may find disturbing.

Armenian prisoners of war, including civilians held captive by Azerbaijan following the 44-Day War, have been subjected to coordinated and state-sanctioned physical and psychological torture, Armenia’s Human Rights Defender said Wednesday at a presentation of an emergency report by lawyers and human rights advocates detailing official Baku’s systematic inhumane treatment of Armenians while in custody in Azerbaijan.

In presenting graphic details of incidents of torture and public humiliation of Armenian POWs, Tatoyan stressed that ethnic hatred because of the captives’ Armenian identity played a key role in the state-sponsored policy, Armenpress reported on Wednesday.

“Of course, the cruelest treatment happens immediately after a person is being taken captive, by operatives of special forces,” said Tatotyan listing various examples of ill-treatment, including throwing food on the floor and forcing the captives to eat it. In other instances, the captives were given 10 seconds to eat, after which the food was thrown in the trash.

Tatoyan also said that cases of Azerbaijani special forces operatives deliberately would stick their fingers in open wounds to agitate a captive, forcing them to beg for relief and treatment. POWs, who were stripped naked, had cold water thrown at them in freezing temperatures with the windows of the facility wide open.

The Human Rights Defender explained that most of the testimony for the report was culled from interviews with POWs who returned to Armenian from captivity.

Some POWs reported, according to Tatoyan, that ahead of visits by representatives of the International Committee of the Red Cross, Azerbaijani military officials would soften their approach toward the captives.

The most often cited incidents were when Azerbaijani forces would use severe torture to force Armenian captives to make anti-Armenian and pro-Azerbaijani statements. In once instance, an Armenian captive was forced to declare that he allegedly killed 50 Azerbaijani in Zangelan, according to Tatoyan.

According to the report, Azerbaijani special forces reserved the most cruel treatment toward veterans of the Karabakh Liberation War (1990s) and the April 2016 War.

Other instances of public humiliation and torture have also been reported by the Armenian captives, who said in some cases Azerbaijani medical personnel tasked to treat wounded Armenians were violent.

An Armenian POW was stripped naked and an Azerbaijani soldier poured boiling water or tea on his body, before severely beating him, explained Tatoyan who said that the prisoner was unable to walk for 21 days after this.

Human rights advocate and lawyer Siranush Sahakyan also spoke during the press conference, revealed that three state agencies of the Azerbaijani government were primarily involved in torturing the Armenian captives—the Azerbaijani Military Police, the Investigative Detention Center and the jails under the jurisdiction of the justice ministry. She also added that Azerbaijani National Security Service officers have also violently beaten captives.

Tatoyan said that on October 20, 61 Armenian soldiers left Kapan for Kovsakan, in Armenia’s Syunik Province. During an ensuing battle, some Armenian soldiers were killed in action, while the others were either captured or forcibly disappeared by the Azerbaijani soldiers.

“The important part here is that we have identified the facts, which first of all prove that atrocities have taken place not only against persons who were alive, but also against body parts of deceased,” Tatoyan said and presented photos showing Azerbaijani border guards in Kovsakan mutilating the bodies of dead Armenian servicemen by cutting off their ears.

“The report includes clear images showing the Armenian servicemen tied to vehicles and dragged,” said Tatoyan. “Our identification proves that this has happened, for example, with a Turkish-made Otokar APV special vehicle, operated by the Azerbaijani border guards. The fact that the Armenian soldiers were dragged behind the vehicles—dead or alive—is obvious upon detailed analysis of the state of the uniforms, bodily harm, location and other factors.”

Another photo presented by Tatoyan showed Azerbaijani border guards outside the Tatul Krpeyan school in Kovsakan. The photo shows Azerbaijani forces brandishing an Azeri-made Khazri assault rifles, which based on further analysis signal that the Azerbaijani soldiers who tortured the Armenian soldiers were carrying the same make of weapons.

“These are the same [Azerbaijani] servicemen who today are stationed on the roads between the communities in Syunik,” Tatoyan said.

Has Armenia Opened its Airspace to Azerbaijani Flights?