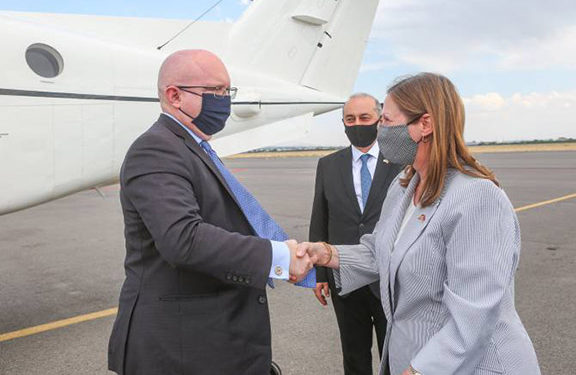 The United States is very concerned by recent developments along the international border between Armenia and Azerbaijan, including the detention of six Armenian soldiers by Azerbaijani forces and the recent death of two journalists in a land-mine incident, Acting Assistant Secretary for European and Eurasian Affairs Philip T. Reeker told reporters in Azerbaijan.

“Too many lives have been lost in the conflict between Armenia and Azerbaijan, and we are concerned the situation at the border could escalate. We call on both sides to resolve these incidents urgently and peacefully,” Reeker said

“The United States considers any movements along the non-demarcated areas of the international border between Armenia and Azerbaijan to be provocative and unnecessary. We reject the use of force to demarcate the border and call on both sides to return to their previous positions and to cease military fortification of the non-demarcated border and emplacement of landmines,” said Reeker, who arrived in Armenia Tuesday evening local time.

‘’We are happy to welcome Acting Assistant Secretary for European and Eurasian Affairs Philip Reeker to Armenia. He will meet with government, civil society, and business leaders to discuss bilateral priorities and issues related to the Nagorno-Karabakh conflict,’’ a statement from the U.S. Embassy in Yerevan said on Tuesday.

While in Armenia, Reeker is expected to meet with government, civil society, and business leaders to discuss bilateral priorities and issues related to the Nagorno-Karabakh conflict.

He said the United States urges the sides to return as soon as possible to substantive negotiations under the auspices of the OSCE Minsk Group Co-Chairs to achieve a long-term political settlement to the Nagorno Karabakh conflict.

Meanwhile, Secretary of State Anthony Blinken on Wednesday said the U.S. will continue to take a look at the appropriateness of providing any, including military aid to Azerbaijan, given the maintenance of tension in the Nagorno Karabakh conflict zone.

Blinken was speaking at a Senate Foreign Relations Committee meeting, during which committee chair Sen. Robert Menendez said he was disappointed that the Biden Administration green-lighted the Section 907 waiver renewal despite Azerbaijan’s attack on Nagorno Karabakh.

“Now, after the 907 waiver, interfering with the actual territorial sovereignty of Armenia in the border issue, not releasing the actual prisoners of the conflict in violation of international law – I mean, I think that they [Azerbaijan] can act with impunity and I think when we waived it [Section 907], we gave them that green-light,” said Menendez.

“We have to continue to take a look at this. I have been working actively on this particularly, getting the return of the prisoners, getting engaged in an actual process discussion negotiation over an actual resolution and working on those things, and it was my hope that we would get a little bit of traction. But I think we have to continue to look at this and re-look at this in the future,” Blinken added in response to Menendez’s question.

Armenian National Committee of America Executive Director Aram Hamparian commended Menendez and other congressional allies for demanding an immediate stop to any and all U.S. military aid to Azerbaijan”

“Not a single US taxpayer dollar should be shipped over to the oil-rich, racist, and violent Aliyev regime. Period. End of sentence,” said Hamparian.