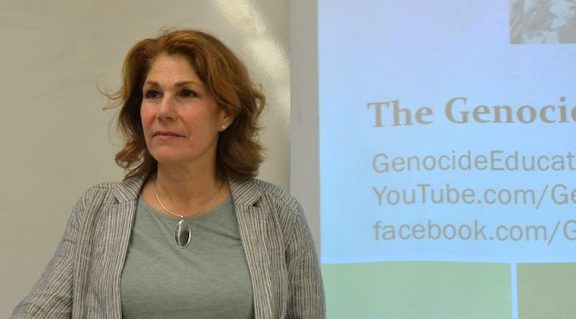 Roxanne Makasdjian during one of her many presentations as GenEd Director

“After working tirelessly for many months with Governor Newsom and his office on the launch of his Council on Holocaust and Genocide Education, we are gratified that the Governor has appointed long-standing member of our ANCA-San Francisco chapter, ANCA-WR Education Committee member and Executive Director of the Genocide Education Project Roxanne Makasdjian to represent the Armenian American community on this distinguished Council,” said Nora Hovsepian, Esq., Chair of ANCA-Western Region.

“We heartily congratulate Roxanne and know that she will ably and passionately bring her expertise to ensure the proper inclusion of the Armenian Genocide in the important work of this Council. We are grateful to Governor Newsom, Council Chair Senator Henry Stern whose legislation sparked the creation of this Council and to all his colleagues who are committed to its success. The ANCA-WR stands ready to continue its collaboration with these public servants to address the challenges caused by ongoing Armenophobia, anti-Semitism and other forms of hate which stem from and lead to the ultimate hate crime of genocide,” concluded Hovsepian.

Governor Gavin Newsom had announced the launch of the Governor’s Council on Holocaust and Genocide Education during a visit to the Museum of Tolerance in Los Angeles on October 6, 2021. The Council will be tasked with identifying instructional resources to teach students across California about the Holocaust and other acts of genocide and provide young people with the tools necessary to recognize and respond to on-campus instances of anti-Semitism and bigotry.

“An attack on any of our communities is an attack against all Californians and our state will not stand by as the forces of hate instigate acts of violent extremism that put lives at risk,” said Governor Newsom in announcing the appointments on Monday.

“California is taking action with major investments to support anti-hate programs and enlisting the expertise of demonstrated leaders in Holocaust and genocide education to inoculate young people against the dangerous messages of hate and division pervading our public discourse,” added Newsom.

In addition to Makasdjian, Newsom also appointed the following to the council

“I could not imagine a more important moment for this council to launch this critical work. The council members bring a depth of knowledge, experience, and expertise and I look forward to working with them as co-chair,” said Thurmond, the State Superintendent of Public Instruction Tony Thurmond, Co-Chair of the Council.

“We know that comprehensive Holocaust Education implemented at all schools is an essential part of our effort to combat antisemitism and all forms of hate. The work of this council, along with the CDE’s anti-bias education training and Education to End Hate initiative, gives me hope that through education we can work in solidarity towards a better future for California students,” added Thurmond.

Since the launch of the council in October 2021, Governor Newsom’s office has been in constant communication with ANCA-Western Region and representatives of other communities to identify academics and advocates who will be serving as members of the council.

Opposition to Hold ‘Unity Rally’ in Defense of Artsakh