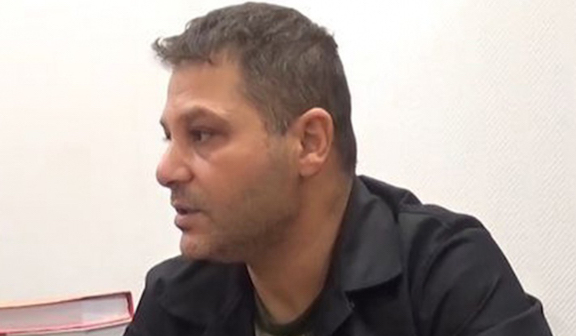 Vicken Euljekjian during his sham trial an Azerbaijani court in 2021

BY JASMINE SEYMOUR
Special to Asbarez

A routine monthly phone call from Azerbaijan’s notorious prison soon became a scream from hell on Friday, November 18. The cold, repulsive detention facility, some 25 miles from Baku, has gained the reputation as having the highest suicide rates among inmates in the world, even among local convicts. At least three Armenian prisoners of war currently are incarcerated there, after facing sham, unfair trials in the summer 2021 at Baku Court of Grave Crimes.

During the much-awaited telephone call, the family of Vicken Euljekjian in Beirut was stunned by the prison feud at the end of the line. The problem being that Vicken, an Armenian-Lebanese hostage in Azerbaijan, was denied to communicate with his Lebanese wife Linda in Arabic, her native language.

“I heard people screaming at Vicken telling him that he can only speak in Armenian. They had no translator from Arabic, only from Armenian. Vicken shouted back at them saying ‘what else are you going to do to me? I am already dead!’ I am extremely worried about him, they could punish and beat him! Then they hang the phone very quickly”, Linda explained.

A few hours later, Vicken was allowed to call back from prison just for one minute. Shaking and sobbing Linda – Vicken’s wife of 22 years – had just enough time to assure him she would do anything for his release. “My heart just melted, when he called me yavriges (my beauty), it made me so happy,” a tearful Linda said shortly after the traumatic incident.

Two years after his arrest near Shushi, there is no sign from the Azerbaijani authorities that Vicken Euljekjian will return to his family any time soon. Several Armenian POWs who have been returned recently have testified that the condition of fellow hostages held illegally in Azerbajani prisons differs. Some are able to endure the physical and mental mistreatment, others surrender quicker to psychological abuse, and those who resist and protest against the disrespectful and degrading treatment, are further tortured by Azerbaijani prison staff. There is enough evidence to confirm that the mental and physical health of Vicken Euljekjian is cause for deep concern to say the least.

The story of Vicken and Linda is very much like Romeo and Juliet: boy meets girl, families strongly disagree to their union, so they decide to run away and get married in a church. Once Linda was baptised in the Holy Savior Armenian Catholic Church, the couple got married in the same church. Only instead of Verona, this love-story was set in Beirut’s Armenian neighborhood of Bourdj Hammoud.

“I came to work in an Armenian store in Bourdj Hammoud in 2000, and one day Vicken walked through the doors to buy a pair of jeans. It was love from first sight. I was so young, and my parents were opposed to our relationship. I was only 17 and Vicken was 18,” Linda said from her tiny Beirut flat that she shares with Vicken’s mother, their daughter Christine and a dozen or so adorable cats that she has rescued.

While the media seems to have covered the Armenian POW crisis a fair amount when it began, there are less and less reports about the continuous nightmare that families of Armenian POWs, whose human rights have been violated in the past two years.

On Friday, Linda went on the Lebanese national television determined to fight until the end.

In her interview with the NBCR, Linda stated that the last phone call with Vicken was the hardest because he could not say much and he was very distraught shouting “I am dead, I am dead.” She believes that his health has deteriorated since last summer, as he is being pressured to not speak to his family about his physical and mental health.

The Lebanese government has been intensively working on Vicken Euljekjiancan’s case for the past almost two years. Hassan Abbas, Lebanon’s Ambassador to Iran, is overseeing the negotiations with the Azerbaijani side for Vicken’s release, as there is no Lebanese Embassy in Baku.

The Foreign Ministry has also reassured the family that they are following the case closely. Ghadi Khouri, the Head of the political affairs of the Foreign Ministry, has addressed the Azerbaijani Ambassador to inquire about the case but the Ambassador’s stance was negative. The family is likewise asking Lebanese diplomats to visit Vicken in his prison bringing him some comfort and hope.

“I know Vicken’s health is not good,” Linda told the Lebanese television on Friday.

“For sure he couldn’t talk at all because they prevented him to speak Arabic with me and my Armenian language is rather basic. Today the phone conversation with him was very tough as he couldn’t speak and this is something that was upsetting him and the line got cut off,” continued Linda in the interview. “I just want someone to help me. Vicken is innocent and has nothing to do with what has happened. I want the Lebanese state and everyone to stand by our side until Vicken is released.”

There are at least 113 Armenian POWs and civilian hostages in Azerbaijani captivity, according to human rights lawyer Siranush Sahakyan, who represents several families of hostages at the European Court of Human Rights. Five more POWs were released in early September, following the US government intervention. Sahakayn said that at least 35 new hostages were taken during the military Azerbaijan’s attack on Armenia on September 13. Later in October, 17 bodies of the most recent captives were returned to Armenia. They were brutally murdered by Azerbaijani soldiers on camera after being captured and disarmed. Among them were five females soldiers, several of whom were tortured to death. Several cases of those atrocious war crimes have been already brought to international courts.

Jasmine Seymour is the founder and head of the British-Armenian humanitarian group, which from November 2020 has campaigned to raise awareness of the gruesome humanitarian crisis plaguing Armenian hostages and their distraught families. Sign the petition calling for release of all Armenian POWs.