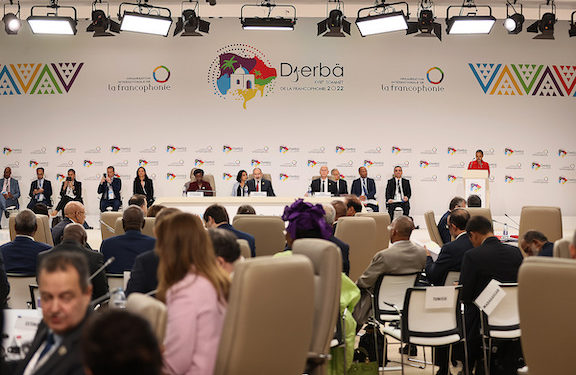 The Francophonie Summit in Tunisia

YEREVAN (Azatutyun.am)—Armenia has denied that a draft resolution at the recent Francophonie summit was altered before its final adoption after Azerbaijan’s president claimed that some of the “anti-Azerbaijani” passages were removed from it by “Baku’s friends.”

Talking to RFE/RL’s Armenian Service on Tuesday, Vahan Hunanyan, a spokesman for Armenia’s Ministry of Foreign Affairs, said that “the words of the president of Azerbaijan do not correspond to the reality.”

Speaking at a party event Monday, Ilham Aliyev claimed that with the support of France Armenia sought to put some “untrue” wording in the final resolution at the French-speaking nations’ gathering in Tunisia on November 19-29 that, if adopted, would advance Armenia’s interests against Azerbaijan. He boasted of Baku’s successful diplomatic efforts, claiming that Azerbaijan, which is not a member of the La Francophonie organization, had managed to foil the “dirty provocation” thanks to its friends among the Francophone nations.

RFE/RL’s Armenian Service got hold of the text of the draft resolution on “Crisis Situations, Their Overcoming and Strengthening of Peace”, which was adopted at the summit of the International Organization of La Francophonie (OIF), but will be officially published only on November 23. Hunanyan confirmed it as the document that was eventually adopted.

With one of the points, more than 50 countries of the OIF express their solidarity with member Armenia, and also express their concern about the recent military escalation between Armenia and Azerbaijan, especially the violations of international law, territorial integrity and humanitarian law as a result of this confrontation. They also welcome the efforts of Armenia and Azerbaijan to find a peaceful and fair settlement of the Nagorno-Karabakh conflict.

“All those documents were adopted by the organization as submitted to the Ministerial Conference, that is, the draft was fully adopted by the summit,” Hunanyan said.

According to the draft at the disposal of RFE/RL’s Armenian Service, Albania, Romania and Moldova had reservations regarding the points related to the Armenian-Azerbaijani and Karabakh conflicts. According to Hunanyan, there were countries that tried to prevent the adoption of the wording, but in the end the resolution was adopted as it was presented.

“Particularly, Albania, with the support of Romania and Moldova, tried to reopen a discussion on these points, but thanks to the work of the Armenian delegation at the Ministerial Conference led by [Foreign Minister] Ararat Mirzoyan during that whole day, and the solidarity toward Armenia in La Francophonie in general, this discussion did not take place, that is, the countries that made the initiative under the influence of Azerbaijan could not achieve what they wanted, and in the end the resolution was adopted as it was planned,” Hunanyan said, explaining that reservations made by any nation do not mean that the resolution was altered in any way.

“One could also imagine an extreme scenario, in which those countries would try the veto procedure and start a certain process, but they did not go for it, because, as I said, the vast majority of the organization’s members were in favor of adopting it that way, and if they tried to start that veto procedure, it would mean going against the whole organization, and it would be unprecedented. Therefore, they opted for making reservations,” the Armenian Foreign Ministry spokesman said.