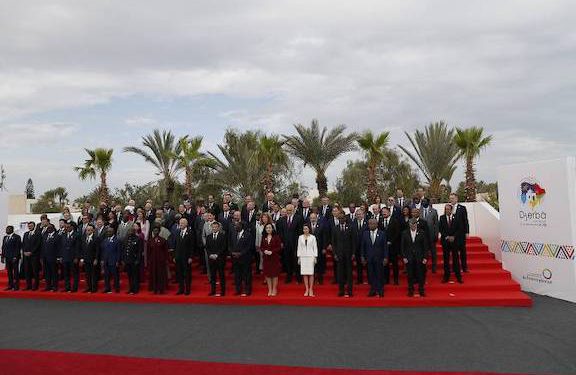 Leaders of the International Organization of Francophonie (OIS) in Djerba, Tunisia

A gathering of French-speaking nations, known as the International Organization of La Francophonie (OIF), voiced deep concern over the recent military escalation on the Armenia-Azerbaijan border, especially what an announcement called violations of Armenia’s territorial integrity.

Armenia is a member of La Francophonie, which over the weekend held its summit in Djerba, Tunisia and adopted a statement expressing support to Armenia.

In a resolution adopted on Monday, the resolution expresses solidarity with Francophonie member Armenia “and in this context expresses deep concerns about the latest military escalation (Azerbaijan’s aggression against Armenia’s territorial integrity and sovereignty), especially about the violations of international law, territorial integrity and international humanitarian law.”

“The Organization encourages the sides, jointly with international partners, to make maximum efforts for the negotiated, peaceful and lasting settlement of issues, respecting the principles of the international law, including the territorial integrity and the inviolability of international borders in accordance with the UN Charter, and urges to strictly respect the ceasefire,” the resolution adds.

The resolution also highlights the importance to avoid new escalation and calls for fully implementing the November 9, 2020 trilateral statement and welcomes the ongoing efforts aimed at peacefully and fairly settling the Nagorno Karabakh conflict.

The resolution also touches upon the humanitarian problems. The Organization expresses its concern about the unresolved humanitarian issues, particularly, those relating to the prisoners of war and other persons held, as well as the fates of missing persons.

The OIF also expressed its concerns about the destruction of cultural heritage and expresses its support to the fulfillment of UNESCO mission to Nagorno Karabakh and adjacent territories.

The OIF member states also thanked Armenia for chairing at the Organization in the past 4 years and express their solidarity with Armenia in the context of security challenges the country is facing.

Prime Minister Nikol Pashinyan, who addressed the OIF summit on Sunday called for the group to condemn Azerbaijan’s occupation of some parts of Armenia and demand the return of Azerbaijani forces to their initial positions.

“Azerbaijan’s totally unjustified and unprovoked aggression led to the occupation of a part of Armenia’s territories, causing death and suffering to the civilian population and causing considerable destruction,” Pashinyan said at the OIF summit. “The established ceasefire, however, has not yet put an end to this country’s ambitions for other territories of Armenia.”

“Faced with new threats, we expect the international community to make a fair assessment of the situation our country has appeared in today, condemning the occupation of some parts of the Armenian territory and demanding the return of Azerbaijani forces to their initial positions,” Pashinyan said.

“Armenia, for its part, is firmly committed to contributing to the process of achieving a peace treaty with Azerbaijan, as well as ensuring the rights and security of the Armenian population of Nagorno-Karabakh,” added Pashinyan.

While the OIS statement did not contain all of Pashinyan’s requests, it did anger President Ilham Aliyev of Azerbaijan who on Monday accused France of masterminding a provocation against Azerbaijan.

He declared, however, that Baku thwarted such a “provocation,” because its allied in OIS were able to temper the statement, whose original text was much more critical of Azerbaijan.

While in Tunisia, Pashinyan met with several leaders, including President Emmanuel Macron of France, Charles Michel, the president of the European Council and Prime Minister Justin Trudeau of Canada.