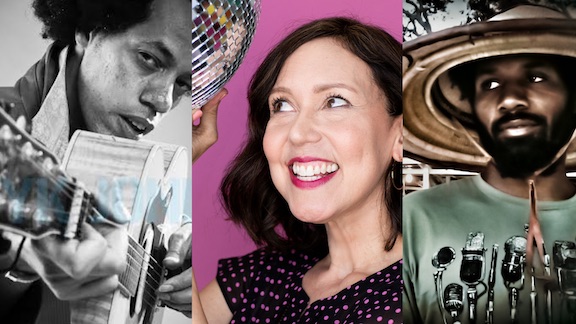 Glendale Arts is presenting its inaugural Solo Performance Festival consisting of three nights of performances featuring Los Angeles-based artists Ernie Silva, Ruthy Otero, and Eternal Mind. The shows will be held at Antaeus Theatre in Glendale, CA from November 3 to 5.

“Nobody Knows my Name,” a performance featuring Eternal Mind, with an introduction from Ernie Silva and Ruthy Otero, will take place on Thursday, November 3, at 8:00 p.m. A poet, a classroom, and an intergenerational debate. All the fire starting elements of today’s world make “Nobody Knows my Name” the funny, profound, and reflective story so many love, cheer, and crave in this day and age. Audiences leave this story feeling life pulsating as the brilliant Actor/Poet Eternal Mind takes them through a journey of metaphors and wordplay to shake them to the core.

“Dancing With My Demons,” a performance featuring Ruthy Otero, with an introduction from Ernie Silva and Eternal Mind, will take place on Friday, November 4 at 8:00 p.m. A 60-minute comedy that wrestles with the most loathsome F word: FEAR. Through storytelling, physical comedy, and disco music, “Dancing With My Demons” holds up a mirror to the painfully funny ways we either move through fear, or let it keep us stuck.

“Heavy,” a performance featuring Ernie Silva, with an introduction from Ruthy Otero and Eternal Mind, will take place on Saturday, November 5 at 8:00 p.m. A story about a Brooklyn kid from the projects who ventures into the life written about in books like Jack Kerouac’s “On the Road.” “Heavy,” based in the genre commonly referred to as “Hip Hop Theater,” is a one-man show where the lead, a slim-built Puerto Rican man with an afro, plays everything from classical guitar to 17 different characters. The show is raw, intelligent, hard hitting, emotionally stirring, socially piercing, and compels the audience to think, cry, and laugh out loud.

Tickets for each performance start at $25 for General Admission seating. Reserved section tickets (with general admission seating within the section) are $35. A $75 VIP ticket includes reserved seats in the front row and a swag bag. Special $25 Enlighten tickets for deserving individuals (age 17+) who would otherwise not be able to attend are also available for purchase.

Donations to Glendale Arts in support of the organization’s mission to connect artists and audiences are also gratefully accepted online.

Ernie Silva is a product of the Bushwick projects in Brooklyn, New York. His creative career started at the age of 12. Eventually his musical side came calling to be recognized throughout his life which he developed himself while sleeping on odd couches, random nights at hostels and homeless shelters, and a few nights riding freight trains around the country. :Heavy Like the Weight of a Flame” is a one-man show Ernie co-wrote with novelist James Gabriel.

Ruthy Otero – Just months after bringing her solo comedy “Dancing With My Demons” to Los Angeles, Variety Magazine chose Ruthy Otero as one of Ten Comics to Watch. She has performed the show in New York, Los Angeles, and in a kickboxing ring in Thailand. Ruthy hails from The Bronx, is a first-generation Puerto Rican-American, and a graduate of NYU. With this show, she hopes to shine a light on the ridiculousness of being a human.

Eternal Mind twists, bends, breaks, chops, mixes, and poetically shapes his world into spoken word—a responsibility he was taught to teach the youth. Through hard hitting imagery drenched in thought provoking style, Eternal Mind unapologetically speaks his language and the elders say, “When he speaks, the ancestors are pleased.” It has been said that artists are the voice of the people. The vibration of Eternal Mind’s words resonates so deeply, that we will indeed know the people have spoken.

Glendale Arts is a 501(c)3 non-profit organization which generates opportunities throughout greater Los Angeles to showcase, promote, encourage, and engage with the arts. Glendale Arts produces the Glendale International Film Festival and is launching its inaugural Solo Performance Festival in November 2022. Find out more online or @GlendaleArtsCA on Facebook, Instagram, and Twitter.