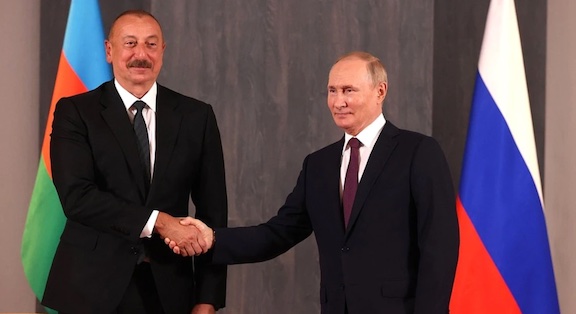 President Vladimir Putin of Russia (right) with his Azerbaijani counterpart Ilham Aliyev in Sochi on Oct. 31

President Vladimir Putin of Russia on Tuesday held a telephone conversation with his Azerbaijani counterpart Ilham Aliyev, with whom the implementation of an agreement reached last month in Sochi was discussed.

On October 31, Putin hosted a meeting between Aliyev and Prime Minister Nikol Pashinyan. The three leaders agreed that Yerevan and Baku will respect each other’s territorial integrity and sovereignty and a discussion on a settlement of the Karabakh conflict will be indefinitely postponed.

Since that statement, Azerbaijani forces have mounted attacks on Armenian civilians in Artsakh and have continued to attack positions in Armenia. Aliyev has also has gone on an offensive by issuing verbal threats of war to Armenia and criticizing Iran and Russia.

“Issues of practical implementation of the agreements reached by the leaders of Russia, Azerbaijan and Armenia in Sochi on October 31, 2022, as well as the joint statements made by the three countries at the highest level in the past were discussed,” the Kremlin said in a statement on Tuesday.

“The importance of continuing the work in the trilateral format for ensuring security on the Armenian-Azerbaijani border and restoring transport infrastructure in the South Caucasus was emphasized,” added the Kremlin statement.

Putin’s conversation with Aliyev took place a day before the Russian leader is scheduled to travel to Armenia to take part in the summit of the Collective Security Treaty Organization, on the margins of which he will also meet with Pashinyan.

Tuesday’s telephone call also was the second conversation between Putin and Aliyev in the last week. The two has spoken on November 17. The short official readout of that call did not mention Armenia or the Caucasus, Azatutyun.am reported.

Also speaking on the phone on Tuesday were the prime ministers of Russia and Azerbaijan Mikharl Mishutsin and Ali Asadov, the Interfax news agency reported.

According to a Russian government statement, the two leaders have discussed trade and commerce between the two countries.

Mishutsin and Asadov “have emphasized the realization of joint program in the transport energy and other sectors.”